A few notes from our Customers

We have purchased meat from Lucas for the past 8 years, and he always provides us with top quality tender and delicious meat. Prior to using his services, we had no idea the difference between the organic meat from Salazar Meats and “store-bought” would be so noticeable! Our orders are processed with professional attention to detail and cleanliness. We have always received wonderful service from him, and we would recommend him to anyone that values knowing where their meat is coming from and that it has been taken care of properly.
The Cocaign Family - Residents of Arvada, Colorado

I have made three large purchases from Salazar Meats: two half Berkshire pigs and one quarter cow, and I have been 100% satisfied with all my purchases. The meat is the best I’ve had, not too much fat, not too much bone, and not chewy; you can really taste the quality. And the packaging is ideal: clear, vacuumed sealed so you can see exactly what you’re taking out to cook. Lucas is obviously passionate about what he does and takes pride in offering the best product possible, and that is what keeps me coming back again and again.

We have used Salazar Meats for the past couple of years, taking in beef and swine. We are very impressed with the facility, it is very clean and well maintained. The quantity we get back is always right on track for the normal percentage on average. The meat has never tasted “old” or tainted. The packaging is always done how you specified. We would highly recommend to anyone that they try Lucas at Salazar Meats – you won’t be disappointed!

There are many wonderful things about purchasing from Salazar Meats. Lucas is a 6th generation rancher who is personable and has a strong work ethic. The product tastes great. Try the summer sausage for sure! The most valuable asset of Salazar Meats to me though is the quality of care the animals receive. 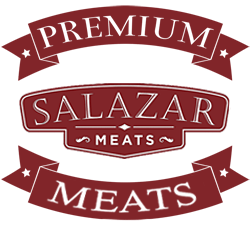 A year ago last summer, three friends told us about some wonderful pork that they had purchased from some guy at the Taos Farmers’ Market. We were a little skeptical at first, but when we found that Salazar Meats raised their own pigs, on pasture, without hormones or antibiotics, we decided to purchase a whole pig from Lucas Salazar at the Farmers’ Market. Because we were curious about how it was cut up and packaged, we arranged to visit the Salazar Ranch and watch as the pig was cut into various portions, chops, roasts, etc.

When we visited the ranch and butcher shop, we were amazed. The ranch was beautiful. Clean, happy looking pigs in clean pasture walked over to us to check us out. Not only were these pigs NOT confined in the inhumane confined animal feed operations like 95% of the pigs are today, but they were heritage breed Berkshires. Most pigs raised today are specially bred to be very lean. Berkshires are bred to taste good.

The butcher shop was very impressive. It was very clean and it was obvious that Lucas and his employees knew what they were doing. We were able to see where all the various cuts came from and it was interesting to see how respectfully the workers treated each other as they worked. We picked up our meat a few days later after it was hard frozen.

Our difficulties began when we defrosted the first package of pork chops to cook on the grill. The taste and texture of the meat was superior to any pork chops that we had purchased from a supermarket. This caused a problem. The chops were so good that we tended to have them very frequently, and we soon ran out of chops. We had to find some recipes for roasts when we had cooked all the chops. We had seldom purchased pork roasts in the past, but with a few cookbooks and the internet, we have found some amazing pork roast recipes. Cuban pulled pork tacos are just one delicious example. Of course the ribs were good, but the bacon was to die for.

Were we happy with our pig? Kind of. It was so good that we bought half of a grass-fed beef the next fall. That was just as remarkable. We have always cooked store bought beef well done because of concern for hormones, antibiotics, and possible e. coli contamination that come from feedlot corn finished beef. The grassfed beef has superior flavor and texture and we cook it to medium rare. It is indeed wonderful.

Some 95% of pigs and cows are raised in industrial scale confined animal feeding operations (CAFOs). They are given antibiotics because living in such inhumane conditions will make them sick. If we are going to eat animals for food, they should least be treated humanely and they should not be contaminated with hormones, antibiotics or e. coli.

We bought a second pig this fall. We will continue buying all of our beef and pork from Salazar Meats. This is a superior product. And surprise! The cost per pound is almost exactly what you would pay for inferior meat in a supermarket.

Give us a call to place an order for high quality, local meats for your family table.